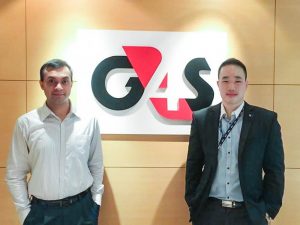 Working for the largest private army on earth has been a privilege and interesting turn of events. Like all industries, on the outside there is not much to see except in G4S’ case, security guards and valuable goods transport trucks all over the city. Being on the strategy team that is fairly new and an upcoming department to modernize classic service lines is quite innovative yet challenging. Think of it as a team of consultants trying to propose a new strategy to a military command unit.

The world is changing so fast and even the most ancient groups are realizing that technology is soon to come, look now rather than later. Being on the strategy team entails such broad spectrum from pitching business development, due diligence on M&A/disposals, driving sizable macroeconomics to financial matching of initiatives. Under such pressure as a new team to innovative and drive initiatives, it has been a rollercoaster coming in at the right time and moment to witness intense politics that commands the direction this private army aims its guns at. Knowing I was able to contribute to that and also have a say, although small, is a privilege in its entirety. Regardless of what happens at the end, I would have done and said the same over.

It’s been less than a month at this giant multinational corporation, but it’s been a month sitting with regional heads of over 28 countries across Asia and the Middle East. In no other company or given spot have I witnessed so many management and leadership styles put aside their differences to sit down in the same room and say what has to done and what has to be left behind.